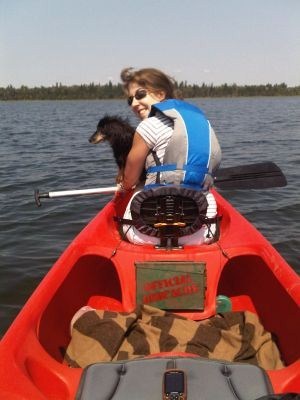 On the way to hide the cache
Photo Credit: Ryan Goolevitch

This cache isn’t near Rosthern, but I am going to write about it due to an interesting adventure we had while doing cache maintenance last summer.

The fact that this geocache is in a fantastic provincial park with the permission of Saskatchewan Parks doesn’t hurt, either.  This cache is located on a very small island in the middle of Madge Lake in Duck Mountain Provincial Park.  This park is on the Manitoba border, north-east of Kamsack.  If you’re looking for a terrain 5 cache this summer, this one’s a fun adventure.  Check out GC2CHKR and Duck Mountain Provincial Park.

The lake in this park is amazing – when we were there last summer, the water was crystal clear.  The fishing is said to be great, and there are awesome opportunities for boating and exploring.  There are a few other caches in the park; some which require more effort to get to than others.

We placed the canoe adventure cache before we had children, and were able to hop in a canoe for a few hours.  Last summer we had a 20 month old and were soon expecting a baby, so we had to forgo the canoe to check up on the cache.  Instead, we rented what was left – a pontoon boat.  Due to flooding, we knew that the cache had drifted, and we hoped it was  still nearby.

When we reached the Island, we knew we were in trouble, as the flooding was so bad that dead trees stuck up out of the water a long way from the cache.  Nezgar had to jump in (brr, it was June), and wade to the cache.  Amazingly enough, the resilient ammo can was there, and Nezgar relocated and secured the cache on higher ground.  He took a new set of coordinates and climbed back into the boat. 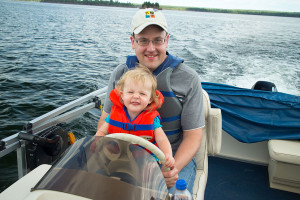 As we were using dead branches to push away from the island, we saw something fly off the back of the boat and into the water.  It happened in slow motion – it was the GPS!  Our toddler had grabbed it and overboard it went.  This has got to be a cacher’s worst nightmare!  Using long branches, we manoeuvred the boat until we could see the GPS a few metres below.  If the water hadn’t been so clear, we never would have been able to relocate the unit.  This was difficult, as it was breezy and the giant boat kept drifting around.  The GPS unit comically read ‘lost satellite signal’ on the screen.  No kidding!

After several attempts to grab the strap of the GPS with a really long stick, and many frustrating moments thinking the unit had been lost for good due to us drifting around too much, Nezgar successfully recovered it. We don’t have any photos of this amazing recovery as I was too busy keeping our daughter from throwing our camera overboard as well!

Learn a lesson from our experience – most GPSr’s do not float!  When boating, keep the unit well away from small children (she was lucky she was so cute!) and maybe even tie something onto it to make it float.  Also, ‘water resistant’ does not equal water proof. IPX7 only means approximately 2 metres of water for about half an hour, leakage did begin.  Upon recovery, the unit wouldn’t turn on properly.  Nezgar opened it up and dried it out for several days, and luckily for us, the GPS has been just fine since.  Phew!  We even managed to recover the updated coordinates for the geocache.

Map showing the Mega Event location in Rosthern, SK (A) and the Cache in Madge Lake, Duck Mountain Provincial Park (B)