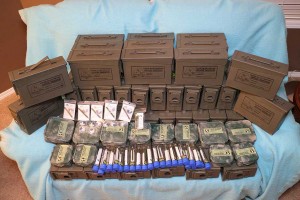 The cache allotment for the Prairie Storms Adventure Trail. (¼) The other ¾ will be hidden in the Rosthern area.

I’m sure many of you are interested to know what we’re up to. Things are getting crazy with just over 30 days to go until the big day! We’ve received a big order of caches, and we’re beginning to get them placed. We are also proud to announce the name of our Southern Saskatchewan series: the “Prairie Storms Adventure Trail“! We plan to have this series published within the next two weeks.

Enjoy the hidden secrets of Southern Saskatchewan by getting off the beaten trail to sites seldom visited, scenic views, historic sites and buildings. The name also pays tribute to the Alberta’s “Prairie Winds Adventure Trail” which was created for the Best of the Bad (WestCan 1) MEGA event in 2011.

This series will also take you along the Red Coat Trail, which is a 1,300 km route through southern Manitoba, Saskatchewan and Alberta taken in 1874 by the North-West Mounted Police in their quest to bring law and order to the Canadian West. In Saskatchewan, Highway 13 is designated as Red Coat Trail.

54 caches have been placed for this series so far. There is a good mixture of ammo cans, lock boxes, bottle tubes, nanos, black knob, and a fish.

Of our caches received from WorldCaching, 40 were allocated for this series. About 13 ammo cans are left, about 3 lock boxes, and pop bottle tubes. The remainder may yet to be placed if time allows, or will be sent up to the Rosthern area for the placement efforts there! 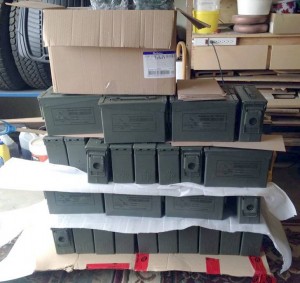 Another 110 painted and logoed ammo cans  were delivered to Saskatoon, and in the words of deadman’s angel upon receiving the palette shipment “It is like Christmas at my house right now. Oh the presents that were delivered makes me all warm and fuzzy inside.”

These caches won’t be published until close to the event date, so stay tuned for the official release dates for all of these! 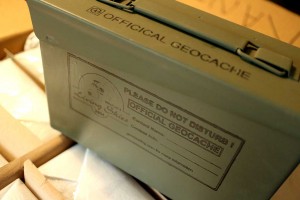 This entry was posted in Announcements, Featured Geocaches. Bookmark the permalink.