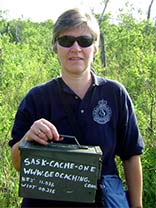 I started geocaching in 2007 when I was working and living in the Yukon. I needed something to get me outside and soon found it was a great way to see those hidden gems of places that tourists don’t get to. As someone who loves the outdoors and a challenge, I have geocached while hiking, via canoe and kayak, on horseback, on dogsled, in a hot air balloon, on a bicycle, on a snowmobile and even got a first to find on an EarthCache while on a cruise ship.  I have cached in every province and territory of Canada, almost all 50 states and this winter plan on adding another country to my list.  I introduced my husband and sister to the sport who are now avid geocachers as well and we have started to plan our holidays with geocaching in mind.  The only downside, if there is one, is that I still work full time and cannot get out as often as I would like.

I enjoy all aspects of the sport.  From the basic traditional to the mind testing puzzle to the great events where you meet interesting people from all walks of life, this activity has never ceased to be enjoyable.  I have also made some great friends, many of whom are now working with me on Living Skies 2014.  I look forward to greeting everyone when they come to Saskatchewan. We have some awesome activities planned and will show you some of the great prairie hospitality.

Ryan & Vanessa began caching in 2009 when living in Burnaby, BC. They are now living in Regina, Saskatchewan with two young children, which has slowed down their caching. They were members of the geo-trust committee of WestCan 1, and have attended WestCan 2, & 3. They are proud to bring the next instalment to their new home province.

Over the past 4 years, Ryan and Vanessa have found geocaching to be a great complement to their love of travel and Ryan’s photography. They have geocached in China, which proved to be a new challenge as it is difficult to be stealthy as obvious foreigners. More recently they went on a caching road trip across the northwestern US, and later San Diego. Now they need to wait for the kids to be old enough to return to the places they visited prior to being geocachers, such as Atlantic Canada and Europe.

In efforts to promote geocaching in the province, they designed the 2011 Saskatchewan Geocoin, and Ryan maintains the Regina Geocachers website and Facebook group. Ryan’s technical skills have been an asset to many geocachers in the Regina area, and he has hosted two intro to geocaching events with the Regina Public Library, and several techie events. 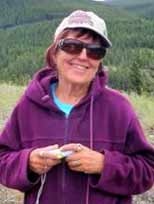 My brother j_s_e_a introduced me to geocaching by taking me on a 10-day road trip to GeoWoodstock VIII and the 10th Anniversary of Geocaching in Washington State. That amazing trip got me hooked on this wonderful fun and friend filled activity that has taken me to strange and interesting places all over the world!

When someone suggested we should bring a WestCan Mega Event to Saskatchewan, I said ‘how can I help?’

Now retired, I have worked in a number of capacities with people, numbers, words and money. I have more than 25 years experience as a board member in the non-profit sector. I currently sit on 4 boards including local and inter-provincial organizations.  I have served in various capacities from member-at-large to President. 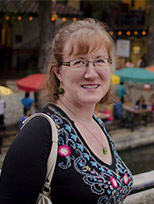 Helen has been geocaching since 2005, and has attended 12 Mega Events and been on the organizing committee, or acted in an advisory role, for 5 of them. She enjoys the challenge of coordinating large scale events, volunteer co-ordination, and helping communities use geocaching to bring experienced and new geocachers to their region. Geocaching with her husband Chris under the name ‘Landsharkz’, Helen co-owns landsharkz.ca, an e-commerce business which serves the geocaching community worldwide and sharkzcoins.ca which designs and produces custom coins for corporate and geocaching clients. 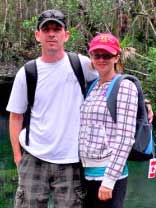 Our journey has taken us from swimming through underground rivers, climbing glaciers and volcanoes to visiting some of the most stunning places in Central and North America to find these treasures.

We have attended Westcan 1, 2, and 3 and we are extremely excited to be a part of the organizing committee for the Westcan4 MEGA to be held in Saskatchewan!

Angelique originally began geocaching under the name yourshoulderangel. She started caching in 2009 while visiting friends and family in the Northwest Territories. In 2011 yourshoulderangel married deadman220 and they combined their 2 names to create ‘deadman’sangel.’

Deadman’sangel has found over 1400 geocaches, in multiple countries, and on two continents–the furthest away being Kenya. Deadman’sangel loves to travel and seeing lots of unique places and meeting great people. Angelique and her husband, Kent, can often be found caching with Schnor and GRDelainey.

Deadman’sangel has attended WestCan 1 and 2. WestCan1 (Best of the Bad) was one of the first caches to be logged under the combined name and was the couple’s 500th find while also being the 500th persons to register. She is very excited to be on the planning and organizing committee for Living Skies 2014. 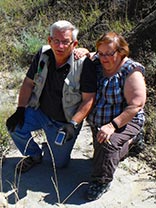 Team schnor has been caching since 2009. We enjoy being in the outdoors and seeing new sights.  We have enjoyed volunteering with several organizations over the past 30 years and it is a privilege to being part of the organizing committee for Living Skies 2014.

One of our most memorable finds was the oldest cache on Vancouver Island: supposedly climbing a mountain trail except there was no trail and we returned cut and battered. We have had lots of great experiences from deep snow in winter and mosquitoes in the summer while caching in the North West Territories to the summer heat in Nevada, but we have enjoyed all of the caches we have found. We are looking forward to meeting many new friends in July 2014!

I bought my first GPS in 2003 to use for canoeing in Northern Saskatchewan. The first cache I found was at a Scout Camp in 2004. Then I went 1484 consecutive days without finding another cache. In 2008 I finally got serious about this fantastic hobby that now takes up a lot of my spare time. Geocaching has taken me to 11 countries, 20 states and 5 provinces. With over 7000 caches now under my belt, my personal record is 567 caches in one day.

It’s a great pastime to get you outdoors, exploring places and forcing you to turn down roads you never would have travelled on leading you to thousands of interesting places that you would never have seen had you not been out looking for just one more cache. And a good part of the fun is caching with some of the wonderful folks I’ve met along the way.

Having been to a few MEGAs over the years, I decided to check it out when the idea of WestCan4 came up and here I am on the organizing committee – one more geocaching adventure! Join us July 19, 2014 – it will be a blast!!!!  Happy Cachin!!! 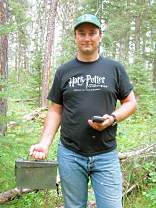 I purchased my first GPSr in 2006 and while going through the menus on it, I came across one that said geocaches. Not having a clue what that was, I googled the strange word and learned about the sport. I thought it sounded interesting, and signed up for a free account and saw there were a few caches not too far from my home. That first year I found a grand total of 4 caches. In 2007 I found 18. In subsequent years I began finding more and more, and in 2013 I travelled to Nevada and completed the E.T. Trail, doing over 2000 caches in a 4 day period. I now am proud to say that I have over 6000 finds in 4 countries. I have attended WestCan 1, 2, and 3 and now have the privilege of being part of the organizing team for WestCan 4.

I look forward to seeing you all in Rosthern, July 2014!