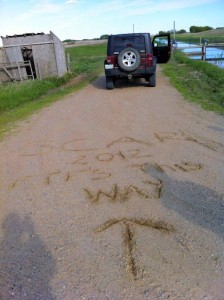 With SCAR 2014 just around the corner, we thought we’d feature one of the highlights from SCAR in 2012. Hidden by Houlagans in 2012, this series of 134 caches was one of the most notable when the caches for 2012’s Saskatoon Cache & Release event were published, and was a major contributor to that years record of 513 new geocaches.

According to the hiders: “Our fun canal series came to be because my parents have a sailboat at the marina at Elbow and we would head cross country to go there and drive down the canal. I’ve known about the canal since I was little, as we used to water ski and fish on Zelma reservoir. A friend and I floated down the canal on a tire tube once, getting out to go around some of the roads while my dad drove alongside in the car. 🙂 We go out there for peace and quiet and decided to share it with other cachers.”

“For the most part, you are only a short distance from a gravel road, so you really aren’t out in the middle of nowhere, even though it feels like it is. We hope to extend the trail this year, time permitting.”