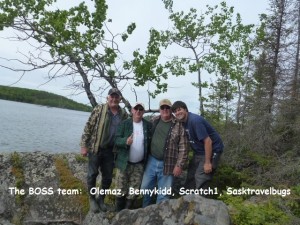 Back in January 2014, Living Skies 2014 featured an interview with the owner of Canada’s oldest unfound geocache listing “SK Extreme 01”, a Virtual Cache in northern Saskatchewan.

At 9:55 AM on Thursday, June 19, 2014, this long-standing pillar of geocaching in Saskatchewan had at last been found! It wasn’t for another few hours before the news was phoned into the owner, due to the remoteness of the location.

Living Skies 2014 committee member Nezgar took some time today to interview “Team BOSS” which consisted of bennykidd, olemaz, sasktravelbugs, and scratch1 about their adventure, and what it took to achieve this monumental accomplishment. All of them will be present at the Living Skies 2014 MEGA, so you can meet them in person! Be sure to check out sasktravelbugs’ adventure geocaching session as well.

June 25, 2014 Update: the Geocaching Blog has featured a story about this adventure as well titled “First to Find 4,355 Days Later” beating out the unfound days of the previously longest unfound cache!

According to Project Geocaching, the new #1 and #2 longest unfound caches in Canada are both in Nunavut:

Have a comment or question about this cache or others mentioned in the interview? Visit our Facebook page! In the mean time, take a look at KenJamin’s Cache Listing:

Map showing location of the Living Skies Mega Event in Rosthern (A) and SK Extreme 01 (B):

This entry was posted in Interviews. Bookmark the permalink.