Southwest Saskatchewan is, without a doubt, the wind generating capital of the entire province. There are four wind farm power stations in all of Saskatchewan and three of the four are found there. One of which is the largest operating wind power facility in western Canada. Geocacher Penquin99 is from that area and has shared following information about the area, and some of the great geocaches to be found.

Wind turbines are usually on tall towers. Long blades, or “rotors” catch the wind and spin. The blades are connected to a drive shaft that turns a generator to produce electrical energy. As the wind speed increases, the power output increases. The electricity is sent through transmission and distribution lines to a substation, then on to homes and businesses. Studies are done to determine where the windiest areas are. Wind blows faster at higher altitudes and over open areas where there are no windbreaks. Good sites for wind farms are the tops of smooth, rounded hills, open plains or shorelines, and mountain passes. A wind farm might have only two or three turbines, or 150 turbines or even as many as 5000 wind turbines.

The Cypress Wind Power Facility is located about 12 kilometres southwest of Gull Lake. There were 9 wind turbines in 2002 with 7 added in 2003 for a total of 16. The turbines are 50 m high (as high as a 12 storey building). Each turbine blade is 23 m long. The wind power is fed into SaskPower’s electrical system. The 33 turbines from both facilities produce enough power for 9000 homes.

If you visit the wind turbines, be sure to catch several geocaches in and around Gull Lake, such as: 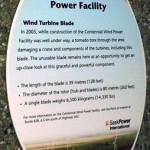 In June/06 the Centennial Wind Power Facility was officially opened. The giant wind turbines stand in farmland near Swift Current in the southwestern part of the province. It is the largest operating wind power facility in western Canada. (only behind projects in Ontario & Quebec) There are 83 wind turbines which can provide enough power for 64,000 homes. The Centennial Wind Power Facility is a SaskPower facility situated in the hills 25 kilometres southeast of Swift Current, Saskatchewan. The 150 megawatt wind farm has 83 turbines, and can produce enough electricity for about 69,000 Saskatchewan homes.

From the cache description: “I think you will be impressed with the size and number of wind mills that cover the prairie plateau. The terrain is rated high only because you have to travel grid roads out to the location which is about 15 km south of the TransCanada Highway. Recommend that visitors use the Highfield Reservoir Road from #1 or Highway 363 (new pavement up to 1 km from site) from Highway #4 to access the location. The actual location has a compacted gravel surface.”

This entry was posted in Scenic SK Sundays. Bookmark the permalink.