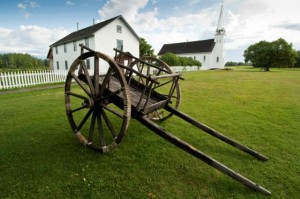 A Satellite event is being planned to take place at Batoche, a National Historic Site of Canada.  In cooperation with us, Parks Canada will be allowing new physical geocaches on-site in conjunction with the Mega event.  This opportunity to experience part of Canada’s history is just 20 minutes north-east of Rosthern.

Batoche is a historic Métis townsite, the site of the provisional government that Louis Riel and Gabriel Dumont lead, and the location of the final battle of the Northwest Rebellion.  This battle took place from May 9th to 12th, 1885.

The Métis are the children of French voyagers and Cree and Sauletaux women.  In the 1870s, many moved westward to Saskatchewan after the Red River Rebellion due to the dwindling buffalo herds and in search of farmland.  They settled along the South Saskatchewan river from St. Louis to Fish Creek.

Tensions arose between the Métis, the Cree population, and the government of Canada.  The Métis became fearful of losing their rights and their land, and so sought out Louis Riel to return north in 1884 and appeal to the government.  Ultimately, the conflict became violent, and after several battles the fight came to its conclusion at Batoche.  The North West Field Force defeated the Métis army after 4 days of fighting.  Riel escaped, only to be hanged in November of 1885 in Regina, found guilty of treason.

At the Batoche National Historic site, take in the impressive audio/visual presentation and display at the visitor centre, and visit the church and rectory, restored with the exception of a few bullet holes.  Interpreters in costume are on site to answer any questions.  Take a longer walk, and see the cemetery as well as rifle pits, the Caron house, and what remains of the village north of the church.  There are also fantastic activities at this site for kids.

In the Rosthern area there are several other areas of note in relation to the Northwest Rebellion.  The town of Duck Lake, Fort Carlton, the site of the Battle at Fish Creek.

Parks Canada Batoche has published an event being held in conjunction with the Living Skies 2014 Mega event, to be held on Friday, July 18th:

Check back for our schedule of exciting satellite events!

Map of the Living Skies Event town of Rosthern, SK (A) and the Batoche National Historic site (B):

This entry was posted in Local Highlight, Satellite Events. Bookmark the permalink.