Continuing the prehistoric fossil theme started by Tethys C + C-side Girl for the first two coins, this coin features “Big Bert” – a prehistoric crocodile which lived 92 million years ago when Saskatchewan was under a great inland sea. He was 5.6 m (19 feet) long, and its skull alone was more than 1 metre long.

The finished geocoins will look spectacular! It features an antique silver 3D die on the fossil side, and a 2D multi-level die on the other, with imitation hard enamels for the text and water around Big Bert’s head, and translucent enamels over a gritty texture on the water side which appear solid in this preview. The current day major rivers and lakes will appear lighter in colour by using a mid-level in the die under the translucent enamel. Big Bert’s eye will also be a yellowy-green translucent enamel over a gritty background, so should really stand out.

Be sure to log your ‘Will Attend’ on the event page, and if you are interested in obtaining this coin (or order more) you can do so via the registration pages. This coin, plus remints of the previous two WestCan Geocoins are only available via pre-order until May 23rd.

The previous two Geocoin Event Geocoins, for reference.
(BC Coin is not to relative scale – it interlocks with the Alberta Coin) 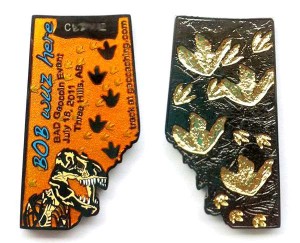 This entry was posted in Announcements, Event Information, Satellite Events. Bookmark the permalink.