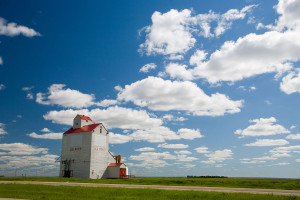 While not terribly nearby the Mega Event location, it is one of Saskatchewan’s more well-known locations by those from out of the province, and is worth checking out if it is by chance on your route to the Mega.

This cache is frequented by tourists, and is at the site of the former set of the popular TV show, Corner Gas.

Corner Gas was filmed in Rouleau, which is about 45 minutes southwest of Regina.  Confusing to those passing through who don’t know the show, the grain elevator reads Dog River, while the highway sign reads Rouleau.  Here’s a video snippet from the pilot episode which aired in 2004 which gives you a good sense of the dry humour of the show. 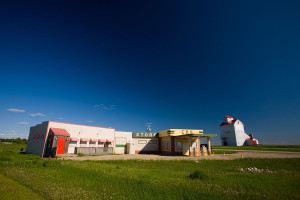 The area around Rouleau is some of the flattest in the province, and perfectly fits Saskatchewan’s stereotypical landscape – nothing like the rolling hills, rivers, lakes and boreal forests in the north of the province.

The set has been turned into a gift shop that is open during the summer months.  The building that was the police station in town is a coffee shop.  If you’re in the area, and you were a fan of the show, this site makes for a fun visit.

The geocache was placed with full permission of the current owners.

Map of Rosthern, SK, to Rouleau: