The photo was taken from the Petrofska Boat Launch. You can see that someone is camping on the island that is hosting this series.

sir dumil has reported in with a new paddle cache series of seven caches he has placed, published just in time for the higher terrain seeking geocachers coming to the area for the MEGA. This is a series of boat-accessible caches mostly along the shores of an island south of the Patrofska Bridge in the North Saskatchewan River. As of the posting of this article, FTF’s are still up for grabs!

The “Current Paddle Series” was inspired by a sequence of geocaches celebrating the history of Petrofka. The geocache “Petrofka Boat Launch” (GC341HW) should be the starting point for the paddle series, as it is a good launch point not far away from the island host. At the boat launch you can see both ends of where the Petrofka ferry operated until 1962, when the current bridge was completed.

From the Patrofska Boat Launch, you paddle upstream under the Patrofska Bridge and eventually to the island.  Each cache is placed so that you can reach the cache from your boat. The current is not nearly as strong near the island’s shore line, but it still presents a bit of a challenge to keep your boat close to the cache while retrieving, signing, and stowing the log rolls.  When you are ready to return to the boat launch, the river current makes the return trip much faster and easier than the trip out. 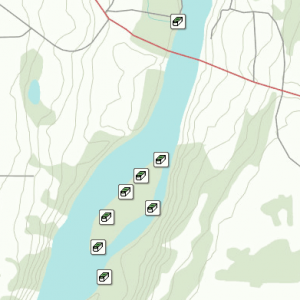 Click to view map of the area on geocaching.com

A good place to start:

The geocaches in the series:

Map showing route from Rosthern to the Petrofka boat launch: